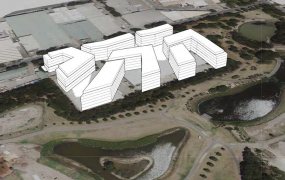 If WestConnex were not enough, there is a proposal to build a six storey,  400+ apartment building in the middle of Sydney Park.

The proposed new development will replace what is currently a low rise warehouse/office building that is tucked behind a row of trees next to the lakes.

The full details are yet to be released, but we do know that the new buildings will be considerably taller than the surrounding trees and will be hard up against the boundaries with Sydney Park.

There is even a suggestion that the new complex will be called Sydney Park.

Formal objections have closed, but we are told that if an objection is received by the end of this week, it will still be considered.

We have prepared a suggested template that you might like to use as the starting point for your own objection – we strongly encourage you explain in your own words why this development matters to – it just carries more weight if you use your own words and talk about the things that matter to you.

Objections should be sent to RHand@cityofsydney.nsw.gov.au ASAP, but definitely by 16/9.