WestConnex, if it goes ahead, will be devastating for Sydney Park. 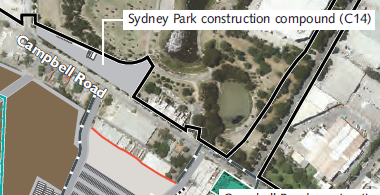 It will take a large chunk out of the south eastern side, for a ‘construction compound’ that will reach almost to the large lake.

It will take off the southern corner, to create a massive intersection between Euston Rd, Campbell Rd and the tunnel ramps. (See the black line on the figure above and to the right.)

WestConnex will chop 12 meters from the south side of the park – the width of two or three houses. This will wipe out most of the big old trees on that side of the park.

There will be two smoke stacks (which are called Ventilation Facilities in the plans, but don’t be fooled. They’re concentrated, unfiltered car exhaust). One will be right on the edge of the park – the other will be about 100 meters away.

And on the south side of Campbell there will be a four story spaghetti flyover. 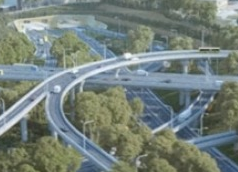 The flyover will be visible from half the park, and the noise and pollution from it and the smoke stacks and the extra traffic on Campbell and Euston will make Sydney Park a much less healthy place to be.

Objections close at 5pm this Friday, the 29th.

11 thoughts on “Save Sydney Park from WestConnex”