Credit Suisse, the investment bankers, have done an analysis of the returns that NSW can expect from our ‘investment’ in WestConnex.

They estimate the value of WestConnex at, wait for it, $3.0 billion. 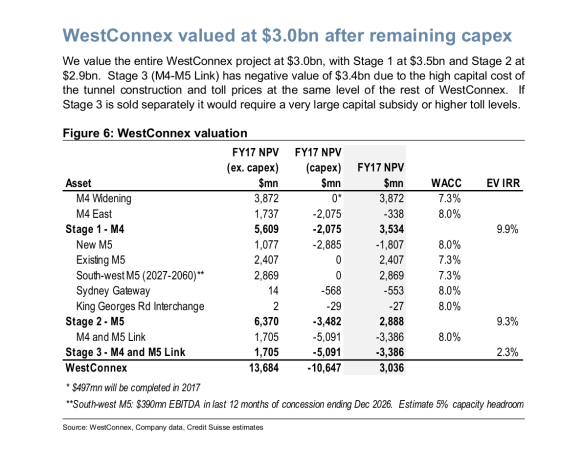 That’s including the existing M4 and M5.

The NSW Government has committed to spending $16.8 billion, in order to sell roads that we already owned, for perhaps $3.0 billion.

According to Credit Suisse, if we had just privatised the M4 and the M5 the value would have been about $9billion.

But the cost of every stage of WestConnex exceeds its value.

Having spent billions already, we are now looking at a return of perhaps $3 billion.

That’s $6 billion less than if we had simply privatised the roads without spending a cent on them.

And that’s not counting the money that has already been spent.

What Credit Suisse’s numbers say is that:

And this is on the Government’s numbers, which I promise you, are dodgy.

The actual cost is already higher than the forecast, and the actual benefits are going to be lower than forecast.

Remember, today (Friday) is the closing date for submissions to the NSW Upper House Inquiry.